Guideline for Disinfection and Sterilization in Healthcare Facilities 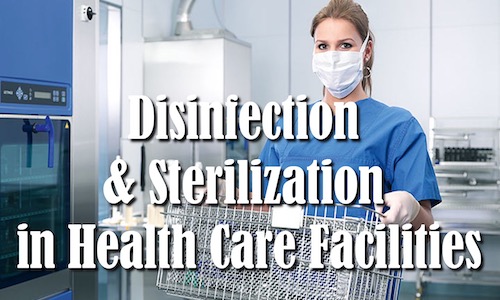 Sterilization destroys all microorganisms on the surface of an article or in a fluid to prevent disease transmission associated with the use of that item. While the use of inadequately sterilized critical items represents a high risk of transmitting pathogens, documented transmission of pathogens associated with an inadequately sterilized critical item is exceedingly rare. This is likely due to the wide margin of safety associated with the sterilization processes used in healthcare facilities. The concept of what constitutes “sterile” is measured as a probability of sterility for each item to be sterilized. This probability is commonly referred to as the sterility assurance level (SAL) of the product and is defined as the probability of a single viable microorganism occurring on a product after sterilization. SAL is normally expressed a 10−n. For example, if the probability of a spore surviving were one in one million, the SAL would be 10−6. In short, a SAL is an estimate of lethality of the entire sterilization process and is a conservative calculation. Dual SALs (e.g., 10−3 SAL for blood culture tubes, drainage bags; 10−6 SAL for scalpels, implants) have been used in the United States for many years and the choice of a 10−6 SAL was strictly arbitrary and not associated with any adverse outcomes (e.g., patient infections).

Medical devices that have contact with sterile body tissues or fluids are considered critical items. These items should be sterile when used because any microbial contamination could result in disease transmission. Such items include surgical instruments, biopsy forceps, and implanted medical devices. If these items are heat resistant, the recommended sterilization process is steam sterilization, because it has the largest margin of safety due to its reliability, consistency, and lethality. However, reprocessing heat- and moisture-sensitive items requires use of a low-temperature sterilization technology (e.g., ethylene oxide, hydrogen peroxide gas plasma, peracetic acid).